This websites use cookies. By continuing to browse the site you are agreeing to our use of cookies.
Accept More information

need advice or a price - request a callback 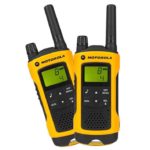 Walkie talkies and two-way radios seem to be the same thing at a glance. They both allow communication between multiple people, without being near to each other. With a push of the button, it is similar to being on a phone. However, they are not the same and phones are an example of one of them.

The Number of Frequencies

The walkie talkies only have one frequency. They are relatively basic but had different designs to suit different needs. Their radio counterparts offer a range of frequencies. It is very possible for people to talk at the same time in private. These types of systems are perfect for the military, by allowing different training exercises to happen at the same time and have different settings for different parts of the team. The use of walkie talkies have become popular for personal use of consumers and commonly for amateur radio operators.

Due to the different bands, the two-way radios need to have a license for use. This is annoying and makes for a difficult situation for a child's toy. This is where the basic feature of the walkie talkie comes in. These communication systems have one frequency. While this can interfere with each other, it is still perfect to keep the cost down.

The two-way systems have stationary options. This is excellent way for the command hubs and long-term stations, such as general headquarters. However, there are handheld options available for people to carry around with them.

Send and Receive Together

Walkie talkies (also known as 'handheld transceivers' by radio hams) only have one transmission capability. You can either listen or speak but not both. With a two-way radio you can do both at the same time; although this is not advised! This is where the phones come in. They are a form of two-way communications; you can speak and hear at the same time if you want but you surely know what happens when you both try to do that!

The next time you are looking for a communication device, make sure you know what you want. Walkie talkies are not the same as the two-way options. The two-way radios are far more superior and allow for two-way communication at the same time. With a walkie talkie, you press a button when you want to speak and then release it when you want to listen.

Many people seem to interchange the terminology when referring to either a walkie talkie or two way radio. This article will help you to clear up the mistaken identity between these two communication devices for they can be remarkably different.

This entry was posted in General News on 27th February 2018 by 2Way Radio Shop. ← Previous Post Next Post →

www.2wayradioshop.co.uk is a website owned and operated by E.E.M.I.T.S. Communications Limited